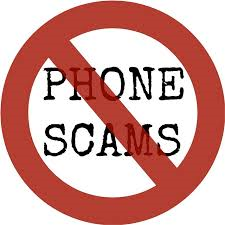 Each tax season, the IRS cautions the public to be wary of becoming the victim of a tax scam. They do

this by publishing a list, appropriately named the “Dirty Dozen,” which identifies the most common

practices used by criminals to confiscate the tax refunds of innocent taxpayers. Because these thieves

are creative and are continually devising new methods of trickery and deceit, the list is published anew

each year. A previous year’s list might not include all of the latest tricks of the game! The following

paragraphs describe some of the most prevalent scams being used this tax season.

by telephone, pretending to be the IRS. In response to the rise of this activity, the IRS has issued

statements informing the public that they never contact taxpayers by telephone. If someone calls

claiming to be an IRS representative and asking for (or demanding) money, they suggest simply hanging

up the phone without further conversation. The thieves have even gone so far as to devise a method for

money is not exchanged. They also, target the elderly, a segment of the population that tends to be

Tax scammers are also quite skilled at defrauding taxpayers via email. In fact, their emails have become

data, the people receiving them actually believe that they have been sent by the IRS. They often

respond by sending such things as checking account numbers and credit card information. This has been

a serious problem, resulting in the loss of significant amounts of money by trusting taxpayers. The IRS

has repeatedly announced that if they need to get in touch with someone, they will send a certified

letter via the United States Postal Service (or by regular mail if it is not an urgent tax issue). They have

cautioned taxpayers that they will never contact them by either phone or email.

Tax scammers usually wait until the opening of tax season to kick these fraudulent activities, collectively

labeled as “phishing” into high gear. It is then that they turn up the heat, introducing new and more

sophisticated techniques designed to pose as the IRS in order to get the addresses, social security

innocent taxpayers. Over the years, these criminals have caused some serious damage, stealing an

estimated $14 million from unassuming victims. The IRS is constantly receiving calls regarding this

activities and how to avoid falling prey to them.

If your business is seeking an outsourced bookkeeping solution, the experienced professionals at Orange

County Bookkeeping can provide you with the expertise you are looking for. Our licensed accountants

and bookkeepers are equipped to serve Orange County businesses of any size, structure or industry

focus. Visit us today www.ocbookkeeping.com to learn more about our full range of bookkeeping, tax

info@ocbookeeping.com to receive a free, no obligation consultation.